For a limited time we are pairing our latest and best products for you, the discerning biohacker. Get the NExT dual frequency chip implant and the VivoKey Spark implant in our Ultron Implant Bundle – that’s 3 chips in the physical space of two, all at the price of one!!! AND there’s extra goodies we’re throwing in!

WARNING This kit definitely contains dangerous things. While the chip implants included in this kit have undergone several quality checks during manufacture and has been put through a battery of tests, it has not been certified by any government regulatory agency for implantation or use inside the human body. Use of this device is strictly at your own risk.

NExT Chip Implant
The NExT is a 2mm x 14mm cylindrical chip implant encapsulated with robust Schott 8625 biocomaptible soda-lime glass. The NExT includes two chip types inside a single implant! It contains both a 13.56MHz NTAG216 NFC chip and a 125kHz T5577 RFID chip. The NTAG216 NFC chip inside the NExT works with NFC capable smartphones, certain commercial access control systems and door locks, and USB contactless ISO14443A readers. The T5577 RFID chip inside the NExT is a 125kHz emulator that can be programmed to behave like many different types of common 125kHz low frequency chips, including EM41xx, EM4200, HID 1326 ProxCard II, HID 1346 ProxCard III, Indala (and more!) access cards and keyfobs. Check out our video explaining how the T5577 works.

Spark 2 Chip Implant
The VivoKey Spark 2 is a 2mm x 14mm cylindrical chip implant encapsulated with robust Schott 8625 biocomaptible soda-lime glass. The Spark 2 is a product designed and manufactured by VivoKey Technologies, makers of the only cryptobionic implants capable of performing strong cryptographic functions in vivo. The Spark is a 13.56MHz ISO14443A and NFC Type 4 compliant, readable by all NFC reader devices including all NFC capable smartphones and USB readers that are capable of reading ISO14443A chips. The Spark is plug and play! There is nothing to program, and it is cryptographically secure. It works with the VivoKey app to configure scan behavior and expand your capabilities.

Unlike other NFC implants, the VivoKey Spark 2 is not a simple NFC chip, it is a secure link to the future. With the Spark, you aren’t just upgrading yourself, you are becoming part of the most advanced cryptobionic community in the world and your new digital capabilities will keep expanding as the VivoKey platform grows. Welcome to the future.

Check here for more information on the Spark 2 and how it fits into the VivoKey ecosystem.

The T5577 chip inside the NExT implant comes pre-programmed in EM4102 emulation mode. That makes it compatible with with our xEM Access Controller, which enables you to quickly build a simple access control project to open your room, house, or garage door with a wave of your hand.. or with a little more tinkering, unlock your car or even start your motorcycle ! Also included in this bundle is our KBR1 keyboard wedge reader , which acts as a USB keyboard that “types out” the UID or “serial number” of both the xM1 “magic” Mifare 1k chip or the NTAG216 chip inside the NExT implant, enabling a simple computer logon solution .

It can be tricky getting used to using your new upgrades. The small size and cylindrical antenna shape of these types of chip implants means getting them to read with standard readers or smartphones with NFC can take some getting used to. To help you discover the best way to get a read with whatever reader you’re trying to use your new implant with, every bundle comes with a collection of field detection accessories.

The X Field Detectors (XFD) are designed to operate just like chip implants, only instead of a chip they have an LED inside which will light up when you have found the correct location and orientation in which to present your chip implant to the reader. The RFID Diagnostic Card is a handy tool to keep in a wallet, and will tell you all about the frequency and duty cycles any readers you encounter in the wild.

Please expand the sections below to read up on things like performance expectations, return policy, installation procedure, etc.

Chip Specifications
NExT Chip Specifications
The NExT chip contains two completely separate transponders in a single device. Each inductor coil antenna and chip in the NExT are specifically tuned to accommodate co-operation within the same device.

Testing process, return policy, warranty
Testing Process
Our x-series chips come pre-loaded inside injector systems with steel needles and cannot typically be read while inside the needle. Because of this, we perform a full test on every x-series tag before it is loaded into the injector assembly and sterilized. We have also conducted several tests on our x-series chips and cataloged those tests here.

Lifetime Warranty
If you do purchase one of our products and experience a failure, we offer a pretty good warranty on all of our products. You will need to return the product for testing and analysis, and if it is malfunctioning, we will ship you a replacement free of charge. Read all about it on our warranty policy page. 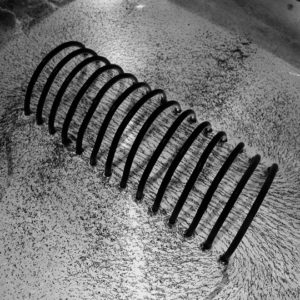 Passive RFID and NFC chips are magnetically coupled devices that power themselves and communicate data over a shared magnetic field the reader generates. This means their effective read range and performance depends entirely on how well the antenna coils of both the chip and reader couple with each other. This typically means the shape, size, and orientation of both antennas must be complimentary.

Because our x-series chips have a cylindrical coil antenna and most readers have a flat spiral plane antenna, correctly positioning your x-series chip is critical. This is why we include our RFID Diagnostic Card and X Field Detector! Watch this video;

A review of the RFID Diagnostic Card & X Field Detector devices
How/where are x-series chips installed? Aftercare? What to expect? 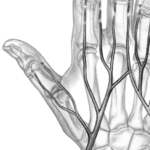 Our x-series transponders are typically installed into the webbing between the metacarpal bones of the index finger and thumb, resting parallel to the index metacarpal. The reason they are installed in the hand has to do with the extremely short read range of x-series chips and the typical use case being some form of access control where the tag must be presented to a fixed reader of some kind. The suggested placement within the hand was chosen due to the lack of major nerve bundles or blood vessels running through that area. 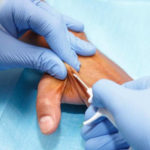 Achieving a safe installation definitely requires a steady hand and experience performing aseptic procedures. Dangerous Things prefers our customers locate one of our professional body piercing or body modification partners to complete the installation of this product. If no partners are available in your area, you should be able to follow this guide to finding a professional in your area who is willing to assist you. For aftercare information and what to expect, please read our X-Series FAQ page.

Can I get an MRI? What about airport security? Playing sports? etc.
You have questions! That’s understandable. The short answer is; it’s all good. If you’re looking for more specific answers, we have an extensive FAQ page that deals with many of the most commonly asked questions regarding installation of our x-series transponders.
NExT NTAG216 Security
The NTAG216 chip inside the NExT was designed for use in more typical NFC applications such as smart posters, labels, and other disposable use cases where the memory contents would typically be written and then locked so it could not be changed. This is done using built-in “lock bytes” which are OTP (one time programmable). That means that once the lock bytes are turned on to protect memory blocks, they can never be unlocked. Once any memory block is locked, it will forever be read-only, which is not ideal for the NExT. Many NFC applications offer ways to “lock” or “protect” your tag, which will end up locking the tag read-only. Because of this, we have disabled the ability to change or set the lock bits in the NExT’s NTAG216 chip.

In addition to lock bytes, the NTAG216 offers a 32bit password protection function. It can be used to password-protect just writing to or both reading from and writing to the user memory space of the NTAG216 chip. Regardless of what some NFC smartphone apps indicate, it is not possible to remove or disable the password. It is only possible to set the password to the default hexadecimal value of 0xFF 0xFF 0xFF 0xFF. If the password is set to the default value, then anyone could easily authenticate, change the password, then write data or change protection options for your tag, and change the password to some unknown value. Because it is also possible to protect memory blocks from unauthenticated reads using a password, this could make the tag completely useless by not allowing any memory blocks to even be read. We set a default password value of 0x44 0x4E 0x47 0x52 or DNGR, but strongly suggest you change it after installation.

Once your NExT is installed, you’ll be able to use any NFC smartphone app to write data to the tag and not need to be afraid of accidentally locking the tag, or changing the configuration bytes, or someone maliciously locking your tag or changing your password. We suggest using NXP’s TagWriter app.